The decor is ideal for holidays in the sun : The beaches of the Mediterranean and the Gulf of La Napoule-, the red rocks of the massif of Esterel and the forest of Mimosa (Tanneron), the playground is ideal, it offers a kaleidoscope of colors for successful holidays on the Côte d'Azur, 365 days a year! On the atmosphere side, the program is in mode Slow Tourism. We take the time! We breathe, we watch, we listen, we share...

The Massif de l'Estérel: 400km of marked trails. THE paradise for hikers and mountain bikers!

It is the ocher red decor that connects the Alpes-Maritimes to the Var. Overlooking the Mediterranean and bordered by the famous road known as the Corniche d'Or, the Massif de l'Estérel is a geological and botanical treasure. At its heart, there are some 400 km of marked trails where hikers and mountain bikers meet.

Secret ride! GEOLOGICAL EXIT TO THE CALDERA OF MAURE VIEIL, IN THE FOOTSTEPS OF THE FORMER VOLCANO OF MANDELIEU.

«Imagine: Mandelieu is more than 300 million years old... During the creation of the continents and the phenomenon of Pangea (a single and enormous continent which fragmented), Mandelieu was located between two continents. Africa to the South and Europe to the North, without the Mediterranean Sea to separate them. When the tectonic plates began to open up, a rift thousands of miles long between Africa and Europe formed and filled with sediment. This is called a rift. This is how this walk in the heart of the Caldéra de Maure Vieil begins.

The Sacred Mountain is an 18-hectare departmental park. From the top of its 131 meters, it overlooks the district of La Napoule, the plains of Siagne as well as the Riou de l'Argentière. It allows a breathtaking 360° view of the Gulf of La Napoule, the Lérins Islands and the Estérel Massif.

Easy hike! A 3.4 km long pedestrian path is laid out while crossing typical vegetation of the local maquis: pines, cork oaks and mimosas. We discover at the top, the ruins of the old fortress and an orientation table. The opportunity to take some spectacular souvenir photos!

The Tanneron massif and the Forest of the Grand Duke: surrounded by nature!

Did you know ? It is LE massif of the mimosa and it is attributed the title of " Largest Mimosa forest in Europe ". It is to be discovered all year round and more particularly in January and February, when the mimosa is in full bloom. It joins the forest of the Grand Duke which has 90 hectares of protected areas.

The banks of Siagne, along the water…

It's unique on the Côte d'Azur! Mandelieu is crossed by the Siagne, a small river which has its source in Escragnolles in the Pays de Grasse and which flows into the Mediterranean. It is a very gentle ride that allows you to reach the beaches, the city center and the district of mimosists without interruption: Capitou.

The vegetation is dense there with more than 2000 trees and shrubs of about fifty different species as well as many species of birds. We come across swans and ducks to the delight of walkers.

Discover the banks of Siagne

The Mediterranean, full of sensations!

Mandelieu-La Napoule opens onto the Mediterranean and beyond the nautical activitiess to practice in the Gulf of Napoule, some service providers offer to go offshore to discover the wild creeks that run along theEsterel or to go out into the open sea to meet the great underwater wildlife. 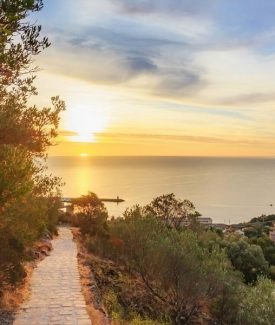